Schlitterbahn Waterpark in Galveston is set to open the attraction “Massiv” which will be the biggest water coaster in the world, with “water blasters’ propelling riders uphill. This looks like a great ride!

Rock ‘n’ Roller Coaster  at is an all time favourite and the first coaster in USA To feature inversions. With its massive indoor maze it features some pretty amazing turns and also audio output a la Aerosmith with  900 speakers.

Here are some specs:

Seven Dwarfs Mine Train A Great Intro to Coasters

We are looking forward to trying the Seven Dwarfs Mine train. After the largest expansion of the Magic kingdom it opened in May of 2014.

Featuring an innovative, first-of-its-kind ride system, guests boarding the Seven Dwarfs Mine Train pivot back and forth during twists, turns, hills and drops. Guests are transported through magical mountain scenery and a glowing mine with scenes of the Dwarfs and frolicking forest creatures.

Music from the film classic accompanies the journey. Seven Dwarfs Mine Train features spectacular Audio-Animatronics – with cars slowing down so guests can spot favorite characters making an appearance in different scenes.

At ride’s end, the cottage of the Dwarfs, replicated from the film to exacting detail by Walt Disney Imagineers, comes into view with a dancing Snow White visible through a window.

A springtime opening is planned for the Seven Dwarfs Mine Train, a rollicking family-style coaster and the crown jewel of New Fantasyland at the Magic Kingdom Park. Walt Disney World Resort guests will be treated to an exciting, musical ride into the mine “where a million diamonds shine” as the lovable world of Sleepy, Doc, Grumpy, Bashful, Sneezy, Happy and Dopey comes to life. One feature will be first-of-its-kind ride vehicles mounted in cradle-like pivots that allow the vehicles to swing back and forth during the ride. Adding to the fun, the journey will be accompanied by beloved music from the Disney film classic. On their adventure, riders pass by animated figures of Snow White, the Seven Dwarfs and playful forest critters. The attraction will complete New Fantasyland, the largest expansion in Magic Kingdom history. Walt Disney World Resort is in Lake Buena Vista, Fla. (Ryan Wendler, photographer)

PortAventura is a theme park and resort near Barcelona Spain. Barcelona is an awesome city and this is a great park to visit. The Park attracts around 4 million visitors per year making it the most visited theme park in Spain. The resort also includes Costa Caribe Aquatic Park and six hotels. It is the biggest resort in the south of Europe. It is owned and built by Anheuser-Busch the same company that brings you Busch Gardens.

This is an incredible video of the PortAventura Shambhala Coaster:

The ride is located in the park’s China themed area, and intersects with the Dragon Khan roller coaster, crossing it several times. Due to the ride’s length, it extends up to the Polynesia area. The ride goes past a lake with fountains, and a pedestrian pathway.

Following the first drop, the track curves upwards into a 190 feet (58 m) airtime hill before dropping again and racing through a sweeping high-speed ‘&’ shape helix. Following this comes some small-size camelbacks and a big splash after a drop and another tunnel. The track ends with 2 more camelbacks and a 180 degree turn into the station.

Fast and Furious Ride Set for 2017

Universal Studios Florido is constructing an amazing ride called: “Fast and Furious Supercharged.” It features incredible ride technology with a  storyboard from the movies. 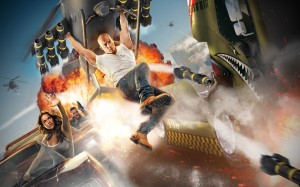 You’ll get to check out some of the high-speed, supercharged cars you’ve seen on the big screen. You’ll be immersed in the underground racing world made famous in the films and explore the headquarters of Toretto and his team. Then, you’ll board specially-designed vehicles for an adrenaline-pumping ride with your favorite stars from the films.

Universal Studies is removing Twister and Disaster and building the “Race Through New York Starring Jimmy Fallon”. It will focus on celebrity races but also Universal Studios says:

You’ll rocket through the streets—and skies—of New York City, from the deepest subway tunnels to the tallest skyscrapers, encountering colorful characters, famous landmarks and anything else that comes to Jimmy’s mind—and “that is some weird, wild stuff,” to quote an iconic previous host.

Cobra’s Curse is going to be awesome. The multi dimensional coaster concept is moving along. Story and some great coaster thrills.

This isn’t your ordinary roller coaster. This one-of-a-kind family Spin Coaster takes riders on a whirlwind of family fun and an adventure of exciting explorations. After ascending on a vertical lift, just like an elevator, riders will come face-to-face with an 80-foot snake icon and trek over the park’s Serengeti Plain.

This family-friendly ride puts guests in the middle of a mysterious Egyptian archeological excavation that takes them on the ride of their life.

Four people were  seriously injured in a collision between two carriages on the high-speed roller coaster Smiler at Alton Towers amusement park. The Smiler coaster has had some ride incidents in the past.

The crash occurred on the two-year-old Smiler attraction on Tuesday afternoon, West Midlands ambulance service said. The accident involved two carriages – one containing 16 guests and the other empty – which came together on a low section of the track.

Witnesses described hearing a sound “like a car crash” and passengers screaming for help as they were suspended in the air.

The Smiler is a Gerstlauer Infinity Coaster and is pretty new. With 14 inversions, The Smiler holds the world record for the roller coaster with the most inversions. Its roll out was plagued with problems. The roller coaster suffered a series of setbacks and ride incidents – including one that occurred during its preview event – that delayed its official opening and resulted in high number of temporary closures. The Smiler eventually opened to the public on 31 May 2013, two months after the ride’s originally planned debut.

Initially, The Smiler was expected to make its public debut in March 2013 for the park’s opening day, but due to construction delays, the date was pushed back to 23 May 2013. The date had to be pushed back further after technical issues were encountered during testing and a ride incident occurred during its preview event that stranded riders on the lift hill. Following the incident on 22 May 2013, Alton Towers explained on their website that The Smiler would not open on the originally scheduled date due to “unforeseen teething problems.”

The Wizarding World of Harry Potter now spans two theme parks – Islands of Adventure and Universal Studios Florida – at the Universal Orlando Resort in Orlando, Florida, USA.
The first phase opened to the public on June 18, 2010. The area’s flagship attraction is a fantastic theme ride called Harry Potter and the Forbidden Journey, which exists within a re-creation of Hogwarts School of Witchcraft and Wizardry. It takes riders on a journey through Harry Potter’s wizarding world and has some fantastic special effects including 3-D pictures that move and change. Other attractions include Dragon Challenge, a pair of just OK inverted roller coasters, and Flight of the Hippogriff, a family roller coaster- great as an introduction for young kids.

The area also features a re-creation of Hogsmeade containing many gift shops and restaurants from the series of Harry Potter books including Dervish and Banges, Honeydukes, Ollivanders, Zonko’s Joke Shop (though it houses Honeydukes), the Three Broomsticks, and the Hog’s Head.

In 2013, it was officially announced that phase two would be constructed in the adjacent Universal Studios Florida theme park with a replica of the Hogwarts Express taking guests between the two lands. Dragon Alley officially opened on July 8, 2014- its a must see!

The ride to experience here is Harry Potter and the Escape from Gringotts, a 3D dark ride/sim

ulator based on Gringotts Bank, the wizarding bank that appears in the movie. The cool attraction design is similar to Transformers: The Ride and The Amazing Adventures of Spider-Man. The remaining attractions are themed around London and Diagon Alley.

All in all a worthwhile visit- but note-go very early- the streets are narrow and rides always busy.

This photo is from the Pacific National Exhibition’s wooden coaster in Vancouver, Canada.